Today we’re taking a break from cartomancy to look at runic divination. Just as any deck of cards can be used for cartomancy any alphabet could be used for divination, but the use of an unfamiliar alphabet has a more mystical flavour.

We might as well get this out of the way: there’s no direct historical evidence for the use of runes as a divination tool before the seventeenth century. The closest we get is a passage written by Tacitus (in 98 CE) in which the Germanic peoples are said to put great stock in lots cast by drawing three strips from a set marked with “different signs”; these signs may or may not have been runes, and may or may not have been single runes if they were runic inscriptions.

In the case of the Elder Futhark, an alphabet of 24 runes dating back to around the second century, we don’t even have certainty that the proto-Germanic names we call them are accurate, as the names are reconstructions based on records in other languages from centuries after the alphabet was created. In the face of that, clinging to the idea that we’ve magically managed to maintain a continuity of tradition with the historic divinatory meanings and use of these runes is laughable. Anyone who tells you that you’re reading the runes wrong because it doesn’t fit their conception of how runes were used historically should be ignored. (There’s rather more evidence for their use in magic, but this series of posts is about divination.)

That being said, the modern systems of divination using runes are coherent, fun, and have a nice sprinkling of Germanic flavour. 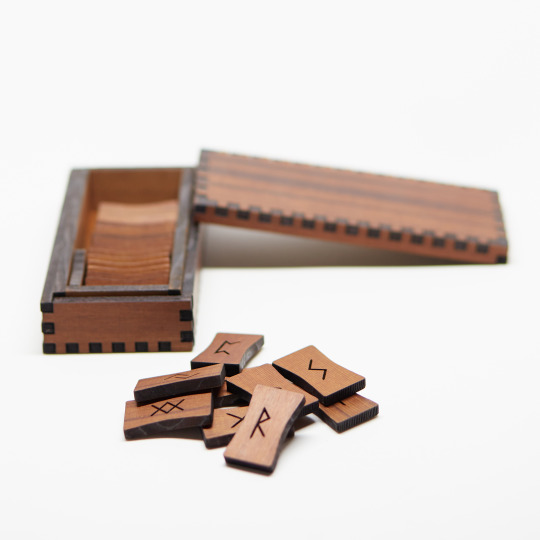 This set of red cedar Elder Futhark rune staves from Alaska Laser Maid is my oldest set of runes and the ones I use most often. I don’t at this point recall if it originally came with a guidebook, and if it did I’ve long since lost it.

This set comes with a “blank” rune which you can use in your readings or leave out, depending on how you feel about its usefulness (and its relatively recent invention in the 1980s.) 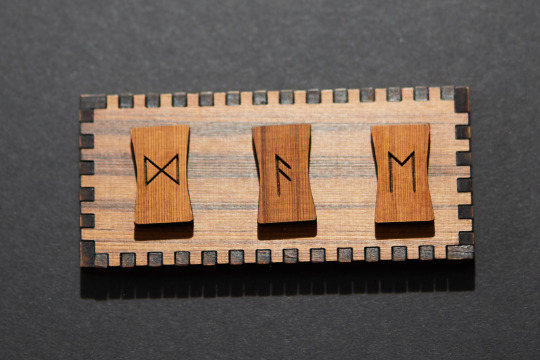 You may have noticed a pattern in the basic divination approaches I’ve been covering. Once again, drawing a single rune is a good place to start practicing rune interpretation, while here I’ve done a simple three-rune spread (Dagaz, Ansuz, and Ehwaz) representing past, present, and future. A very promising relationship spread (I see a tall, dark friend in your future.)

There are significantly fewer runes than tarot cards so reversed (“merkstave”) meanings are both more useful for adding nuance and less onerous to learn, but personally I still only use them in one specific instance that I’ll cover some other time.