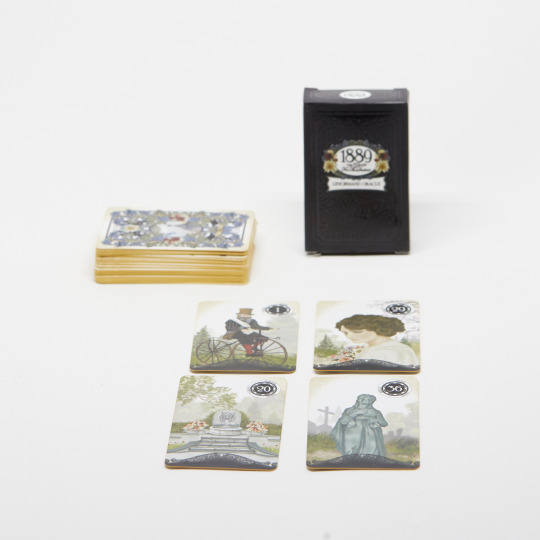 There’s not a lot to say about this deck; the mini 1889 Lenormand Oracle from ForTheSeekers is like the larger one, but small. (Note that unlike my deck the version currently being sold doesn’t have gilded edges, so there may be other differences in quality between the printings.) The mini deck comes with a reference sheet listing keywords for each card (this doesn’t fit in the deck box, so it’s easy for the deck and reference to end up separated.)

In addition to being extremely portable, the smaller size of this deck makes the Lenormand Grand Tableau a reasonable undertaking even with limited table space. This is a common Lenormand spread where all 36 cards are laid out in one of a few configurations (grand tableaus are done with tarot as well, though 78 cards is a lot to lay out and interpret so it’s not as common.) The 9x4 layout is quite popular, though you can also go with 8x4 with an additional row of just four cards, or 6x6, or whatever makes sense to you.

This is the first spread I’ve covered that uses a significator, which is a card that represents the querent. This is fairly important for the Grand Tableau since it gives you a starting point for breaking down the reading; traditionally the significator is card 28 (Man) or 29 (Woman) depending on the gender of the querent. The gender binary is bullshit so I prefer to either have the querent choose a significator or select one randomly before the cards are dealt.

There are then multiple ways of breaking down the spread into manageable chunks based on their relationship to the significator. As a basic start, we can treat cards to the right of it as the future, to the left the past, and its column as the present. Cards above it are things the querent can influence, cards below it are things that will influence the querent. The closest cards are the most important, while distant cards have less impact.