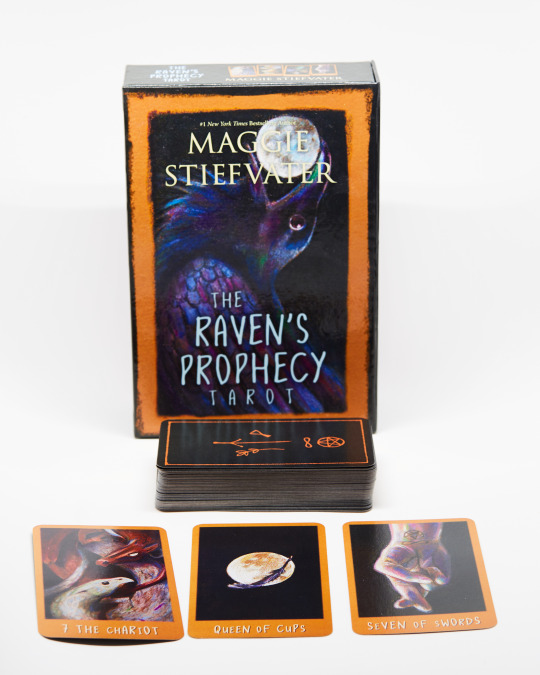 Today’s item is The Raven’s Prophecy Tarot by Maggie Stiefvater, the author of The Raven Cycle. Several tarot decks feature at various points in the books and are described to various levels of detail, but this is not based on any of them (so don’t expect to see Blue Sargent on the Page of Cups.) The deck does integrate imagery and themes from Welsh mythology (which is also important in the cycle) so it’s not entirely disconnected, but the deck is its own thing rather than a novel tie-in.

The deck structure is mostly the same as Smith-Waite, though the older Italian suit of coins takes the place of pentacles. The card stock is slightly thin, though not as bad as some incredibly cheap decks that are impossible to shuffle without creasing or tearing cards. Overall they shuffle fine, with a smooth finish that slides well and loves to show fingerprints on the dark backgrounds.

The accompanying book talks about the theme of the deck, covers tarot reading basics, and has keywords plus a page or so of text for each card in the deck.

The three-card spread is my favourite, especially for quick readings; it gives more room for interpretation than a single card but still isn’t hugely involved. There are multiple ways to assign meaning to the positions, but the most common is the leftmost card as the past, center as the present, and right as the future.