While tarot is the dominant form of cartomancy, it’s far from the only one. The Lenormand deck is named after the famous French fortune teller Marie Anne Lenormand (1772–1843). There’s no evidence that the publication of this deck was influenced by Lenormand’s actual cartomancy methods in any way. The original German Petit Lenormand (circa 1846) was a modified version of a German playing card deck created around 1799 for a game called the Spiel der Hoffnung. She could conceivably have owned a copy of this game and used it in divination, but it’s most likely that the publisher took a deck they were familiar with and slapped her name on it for marketing purposes.

The deck consists of cards numbered from 1 to 36 with simple images on each; while the Spiel der Hoffnung had insets of both a German playing card (suits of hearts, bells, acorns, and leaves) and the corresponding card with French suits (hearts, diamonds, clubs, spades) the Petit Lenormand dropped the German-suited inset. Modern Lenormand decks don’t always include the inset playing card, and it’s rarely referred to in readings.

The 1889 Lenormand Oracle from ForTheSeekers is a high quality playing card deck with coated linen-finish stock and antique gold gilding; it’s not quite as good as a USPCC deck but it shuffles and handles pretty well. It follows the original Petit Lenormand closely, having 36 cards with no additions and an inset of the corresponding French-suited card. 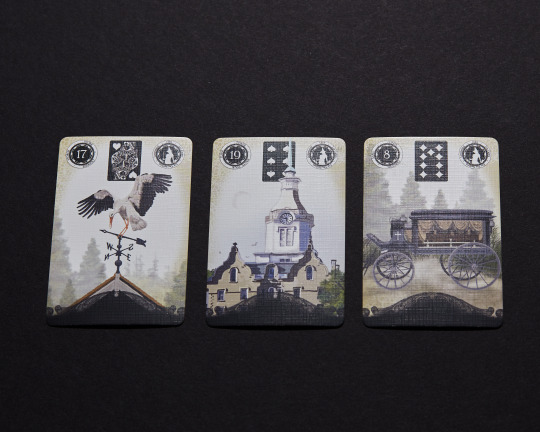 Some Lenormand users get extremely uptight about the correct way to read the cards, and they’ll tell you that it’s impossible to do a single-card reading because the cards must always be read as combinations. I believe that this sort of dogmatism is unhelpful at best; if it’s possible to do a single-card reading with one deck of playing cards, why would it suddenly become impossible with another?

That being said, I’ve skipped to a line of three cards; this could be read in the same way as a three-card tarot spread, but a more typical Lenormand approach would be to treat the first card as the subject and the others as modifiers. Stork + Tower + Coffin: This could be a very negative line, but in context of the specific query it tells me that the querent needs to take a wider view of things and stop being so negative about change.