tl;dr: There are some pacing issues and not all of the jokes work for me, but that’s par for the course for Ghostbusters movies. It’s a fun movie, a funny movie, and I recommend watching it.

Ghostbusters (2016) is loaded with references to the 1984 original, from visual references and injokes to cameos from all of the surviving main cast (with the exception of Rick Moranis, who declined the opportunity), Slimer, and the Stay-Puft Marshmallow Man. Despite this, the film manages to stand on its own and doesn’t make the mistake of retreading the characters and plot of the original. Erin, Abby, Holtzmann, and Patty may have some parallels to the old Ghostbusters, but they’re very definitely not simple genderflips. Similarly, the climax is a paranormal apocalypse threatening to destroy New York City, but it’s not Gozer the Gozerian and it wasn’t brought about by some long-dead Lovecraftian cultist architect.

Leslie Jones, Melissa McCarthy, and Kristen Wiig turn in perfectly fine performances, but I predict that the character everyone’s going to be talking about is Kate McKinnon’s Holtzmann. She’s the quietly competent engineer of the team, building everything from a flaky almost-working proton pack prototype for the first time they confront a ghost to an arsenal of diverse weaponry for the climax. She’s quirky, fun, and has a slightly odd approach to the world (“You try saying no to these salty parabolas.") 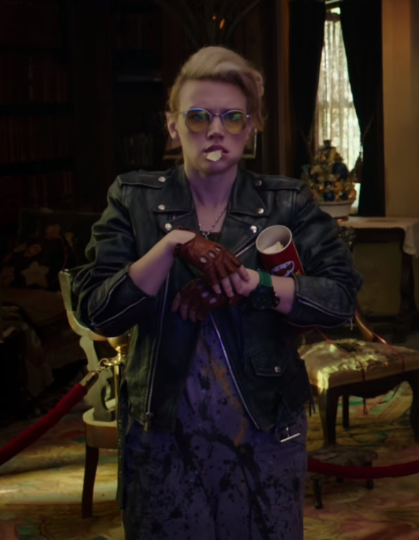 Sadly, the biggest reasons people will be talking about her are not explicitly acknowledged in the film. Holtzmann is both uniquely individual and a frustratingly blank slate, because none of her backstory and very little of her present story is explored. Based on acting and subtext she’s clearly meant to be some flavour of non-heterosexual, but there’s enough deniability that she can be read as anything from asexual homoromantic to bisexual to het. Paul Feig has intimated that studio interference prevented him from making her canonically queer, which is a sad thing in 2016. We should have canonically queer characters in our summer action movies, not just queerbaiting.

I also suspect, based mainly on something that happens near the end of the film, that Holtzmann is on the autism spectrum. It’s not directly addressed in the text, but the delivery of the lines and the content can very easily be read as supporting this interpretation, as can her (now recontextualised) earlier actions. If it is intended it’s an awesome thing to have a kickass female engineer representing a population that doesn’t see much positive media portrayal, and if it’s not intended I believe we’ll see it as a popular headcanon among fans who are themselves on the spectrum.

The character arcs in Ghostbusters are mainly about bullying and how we react to it and deal with the emotions it engenders. Erin and Abby were high school outcasts who became fast friends because Abby was the only one who believed Erin’s story about being haunted by the ghost of her neighbour. Their shared goal was to break new scientific ground through systematic study of the paranormal. They are briefly in opposition at the beginning of the film, because Erin reacted to the bullying of the physics establishment by knuckling under and giving up on paranormal studies in favour of more traditional research, while Abby remained committed to what she knew was right despite the ridicule. Rowan, the villain of the piece, is entirely driven by a desire to take revenge for the insults he’s endured. Rowan is the dark mirror of the Ghostbusters, entrapped by toxic masculinity; he has the same sort of formative life experiences and develops technology that is just as advanced as theirs, but can only see it as a way to cause death and destruction in retaliation for being made to feel powerless. The heroes are heroes because of their ability to build relationships and deal with their emotional baggage in a healthy manner, and that’s awesome.

Newer
A Penny For Your Thoughts Older
The Nightmare Before Christmas: Dracula 3000