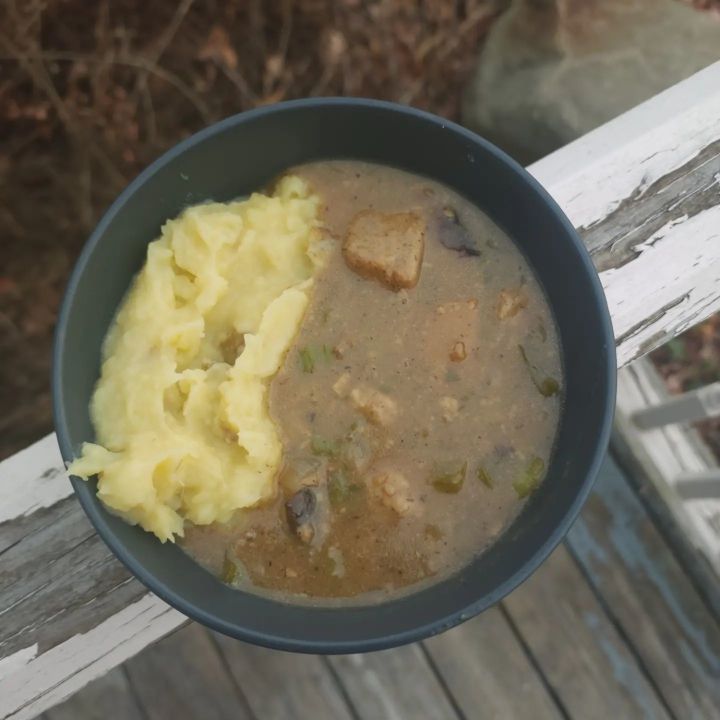 Combine all ingredients in a blender and process on high until smooth.

Cook over low heat until thickened, stirring occasionally to prevent scorching. Spread evenly in a 9"x9” container. Once cool, cover and refrigerate until well set.

Hot smoke with pecan chips for 1 hour (try not to burn it like I did.) This is a very aggressive smoke profile for eating plain, but seemed to work in the gumbo.

You can make a roux the traditional way if you prefer, but I’ve been getting pretty good results with the microwave method.

Combine flour and oil in a heatproof microwavable container (I usually use a Pyrex liquid measuring cup). Microwave on high in 1 minute increments, stirring well each time, until it’s approximately the shade of peanut butter, then let cool; the residual heat should end up darkening it a little bit more, but not scorching it.

This Louisiana vegetable mix (similar to sofrito or mirepoix) is the basis of many Cajun and Creole dishes.

Use reserved vegetable/fungus trimmings, garlic, anything else you feel like (e.g. some extra celery and the rest of the parsley bunch if you’re not going to use it for another dish) and one gallon water to make a stock. I usually do this in a pressure cooker for about an hour, though you can also just simmer it on the stovetop. Strain well.

Add stock to a large pot, and if needed add additional water to bring the volume up to one gallon. Bring to a boil. Add mushrooms, leek, half of the trinity, seasonings, and roux. Season to taste with salt. Simmer over low heat for one hour, stirring occasionally to prevent sticking.

Add the tofu, remaining trinity, and 2 cups water. (Trinity added at the beginning has basically no chance of adding texture, while this second addition should end up soft, but somewhat intact.) Continue simmering for another hour.

Double-check the seasoning; add more salt, pepper, or hot sauce as needed. Add green onions and parsley, then simmer for fifteen minutes. (This might be a better time to add the tofu if you’re not relying on it to add smoke to the stew.)

Serve over long grain rice if you want to be traditional, or over mashed potatoes if you like potatoes.