The Arcana Tarot playing cards by Chris Ovdiyenko are pretty unique. The basic deck is 52 dual-suited but otherwise standard playing cards plus four of the major arcana (The Fool, The Tower, The Lovers, and Death), and comes in dark and light variants. Most partial tarot decks focus on the major arcana, so it’s kind of nice to have one that doesn’t. The imagery is based on the Smith-Waite deck, though like the Marseille the pip cards aren’t illustrated.

The third deck pictured is the expansion deck, which is actually two half decks (dark and light) containing the remaining major arcana, the four Pages, two Jokers, and several gaff cards (for sleight-of-hand tricks.)

The cards are standard USPCC playing cards and handle beautifully. 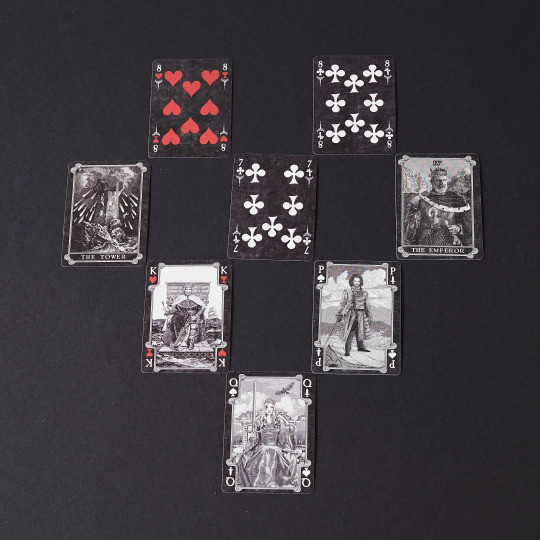 This heart-shaped relationship spread was inspired by one I found out in the wilds of the internet a few years ago, which I shamelessly stole and twisted into something that made more sense to me.